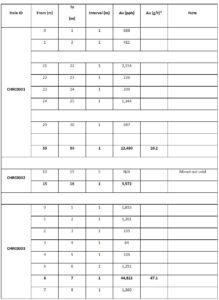 “The Tati Project now covers the formerly producing Cherished Hope gold mine and is within the underexplored Tati Greenstone Belt, where the Company is exploring for near surface, high-grade extensions of the Cherished Hope mine.

The successful intersection of high-grade gold in the three holes for which assay results have been received is very exciting, and the bonanza grade gold assay result already identified naturally inspires us to push ahead with further accelerated exploration work.

Further assay results from the remaining six holes, several of which intersected significant quartz reef intersections (up to 8m thick), are awaited with great interest. ”

– A total of nine reverse circulation (“RC”) holes totalling 490m were completed at Tati as part of the August 2022 exploration programme – representing the first ever known drilling programme carried out on prospecting licence (“PL”) 049/2022. Complete assay results have now been received for the first three holes, with results from the six remaining holes expected in the coming weeks.

– RC hole CHRC0002 was designed to target one of the thicker portions of the quartz reef structure, and due to a shallow dip chosen for the hole it ended up intersecting a mined-out void from 10-15m. The 1m @ 5.6g/t Au from 15m downhole intersection represents the footwall of the main quartz reef structure. The Company is considering steepening the dip and redrilling the section in order to test the entire section of this quartz reef.

– Results for the remaining six holes are pending, including CHRC0007 which returned the single largest quartz reef intersection from 11-19m (8m intersection) of the 2022 drilling programme.

A map highlighting the location of the Tati Project can be found at the link below: The technical information contained in this disclosure has been read and approved by Mr Nick O’Reilly (MSc, DIC, MIMMM, MAusIMM, FGS), who is a qualified geologist and acts as the Qualified Person under the AIM Rules – Note for Mining and Oil & Gas Companies. Mr O’Reilly is a Principal consultant working for Mining Analyst Consulting Ltd which has been retained by Power Metal Resources PLC to provide technical support.

This announcement contains inside information for the purposes of Article 7 of the Market Abuse Regulation (EU) 596/2014 as it forms part of UK domestic law by virtue of the European Union (Withdrawal) Act 2018 (“MAR”), and is disclosed in accordance with the Company’s obligations under Article 17 of MAR.